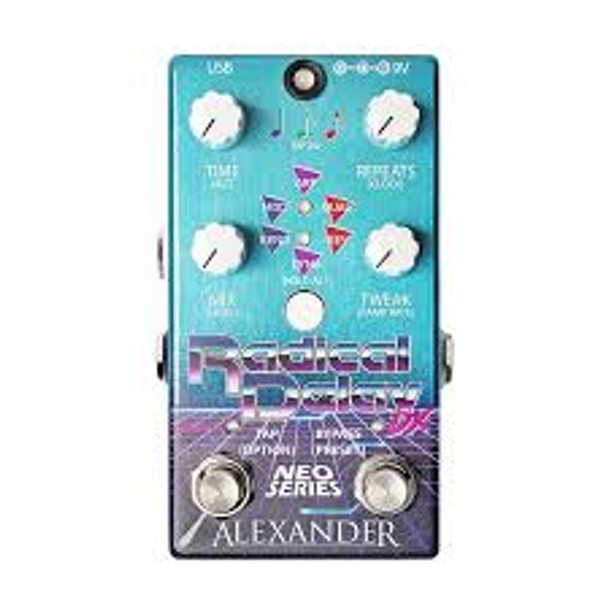 We released the first Radical Delay pedal way back in 2015 as an homage to the tones and aesthetic of the 1980s. We were shooting for video games, neon nights, and maybe a hint of ALF.

It’s now 2019, and according to conventional wisdom we should be fighting with replicants in the streets and competing in futuristic running-based game shows.

Since that stuff hasn’t quite happened yet, we thought it might be time to update the Radical Delay to our Neo Series platform and give it a bit of a makeover at the same time.

Inside you’ll find the same great delay and special effects that made the earlier Radical Delay pedals so fun, plus a few new twists. Outside, we’ve added some teal and chrome, and intensified the laser grid for your enjoyment.

Radical Delay DX features six delay modes, all of which are adjustable to play from 24kHz down to 1.6kHz bandwidth using the CLOCK knob.

The maximum delay time varies by mode and clock rate, but it varies from 680ms to over 5000ms. Yep, that’s over 5 seconds of delay time, but it sounds terrible. It’s gross. Don’t say we didn’t warn you.

REV YALED ESREVER. Tweak warps the delay from forward to reverse, with “tape stop” sounds available in between. ALT mixes between the main reverse delay and a forward delay. Just want reverse? Set Mix, ALT, and Tweak to maximum.

DYNA Dynamic delay. The delay time sweeps with your picking attack. Tweak controls the sweep amount and direction, and ALT sets the volume sensitivity. Be careful with short delay times - that’s where the laser birds live.

MSRP:
Now: $449.00
Was:
After four years from his launch, being awarded and used by some of the most important musicians in live shows and in their records such as Steve Lukather, Joe Walsh, Alan Parsons, Motorhead, Skunk...
GURUS-ES3

MSRP:
Now: $449.00
Was:
Strymon TimeLine Multidimensional Delay  The Strymon TimeLine's lush and inspiring delays and simple control layout may make you want to leave your valuable and vintage pedals at home. The...
TML