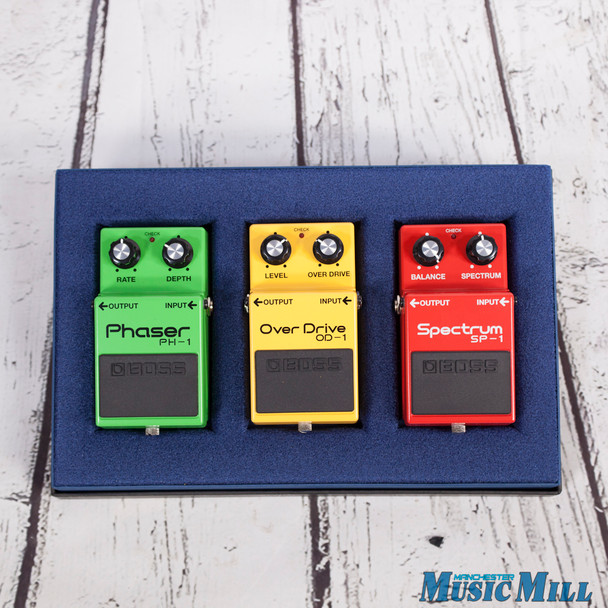 In celebration of four decades of compact pedal innovation and the support of millions of worldwide users, BOSS is pleased to offer the Compact Pedal 40th Anniversary Box Set. This special limited-edition commemorative package features one-time-only reissues of the OD-1 Over Drive, PH-1 Phaser, and SP-1 Spectrum, the original three BOSS compact pedal models. Only 1500 box sets will be produced, and each comes in a deluxe presentation box with the BOSS 40th Anniversary logo and a numbered message card.

MSRP:
Now: $119.00
Was:
From Idiot Box: The Blasteroid Fuzz is a straight clone of the elusive Earth Sounds Research Graphic Fuzz. Not many of the real deal working out in the wild so I’m stoked to have put this...
IB006

MSRP:
Now: $129.00
Was:
At first the Blower Box was my attempt to capture the classic Voivod Blacky sound on the Nothing Face album. They are my favorite band of all time and Blacky is my favorite bass player of all time. I...
BLOWERBOX

MSRP:
Now: $199.99
Was:
Since its introduction in 1979, TS808 has been one of the most influential pedals in the world and loved by countless players over generations. Commemorating its 40th anniversary, Ibanez proudly...
TS80840TH

MSRP:
Now: $129.00
Was:
The Lost Ark is a no frills PLL glitchy octave fuzz. FREQ knob is pretty much self explanatory, the OUT knob is the main PLL output level control, OCT1 and OCT2 knobs control separately levels for...
LOSTARK

MSRP:
Now: $399.00
Was:
We now carry JHS pedals! Come try out all of their staples! The Colour Box V2 has all the same functionality of the V1 with many new and improved additions like expanded EQ controls, a Hi/Lo switch...
COLOURBOXV2