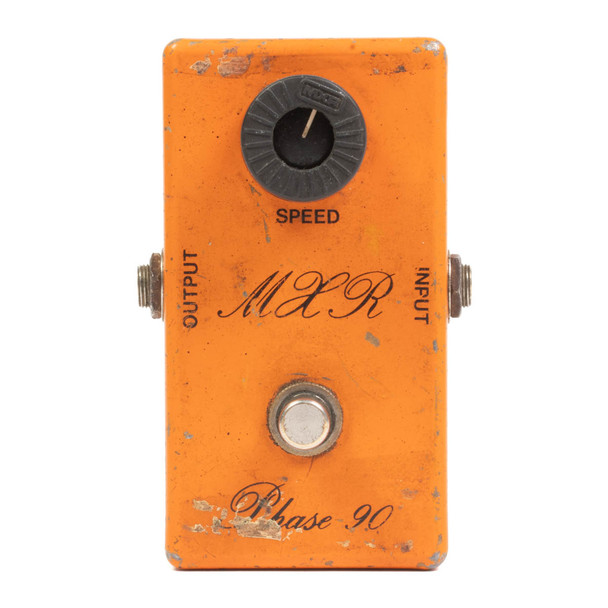 The unit shows signs of it's age, but is in great working condition. The unit contains 5 of the 6 original chips, one has been replaced, but the original chip is included. See pictures for full cosmetic details.

Out of all the countless Phase 90 pedals out there, this one is particularly awesome. Why? because it was one of the very first ever made. The very first pedals MXR ever made are not made in the standard, heavy MXR-stamped enclosure. They're made in a DIY enclosure by a company called Bud, so they're referred to as Bud Box enclosures. The original pedals were painted by Terry Sherwood and Keith Barr (founders of MXR) in their basement shop with a $40 Sears spray system, and the script is hand printed by Keith. The circuit boards were also etched in a fish tank by Keith. No that is not a typo, and is still a very popular method with DIYers. Most of these early pedals were all sold out of the back of their cars at local shows. The Phase 90 was Keith's totally original phaser design. In fact, there was really only one other commercially successful phaser on the market for musicians. And it wasn't even really a guitar pedal. It was the Maestro Phase Shifter, and it was huge. Keith wasn't really impressed with the user interface. He wanted to take these circuits and make them simple, accessible, and small. The design comes from a radio textbook. He took that, adapted it, and added to it. He took a piece of gear that people loved, and he made it small enough to throw into your gig bag. This is right up there with the Tube Screamer as one of the most iconic pedals in history, and it’s definitely the most classic phaser ever.

MSRP:
Now: $109.99
Was:
MXR says: Often imitated but never duplicated, the elusive vintage “script” Phase 90 is at the top of the list for pedal collector’s world-wide. The original...
CSP101SL

MSRP:
Now: $89.99
Was:
For more than four decades, the MXR Phase 90 has been a mainstay on the pedal boards of millions of players around the globe. This little orange box went on to become the sole icon of its...
M101