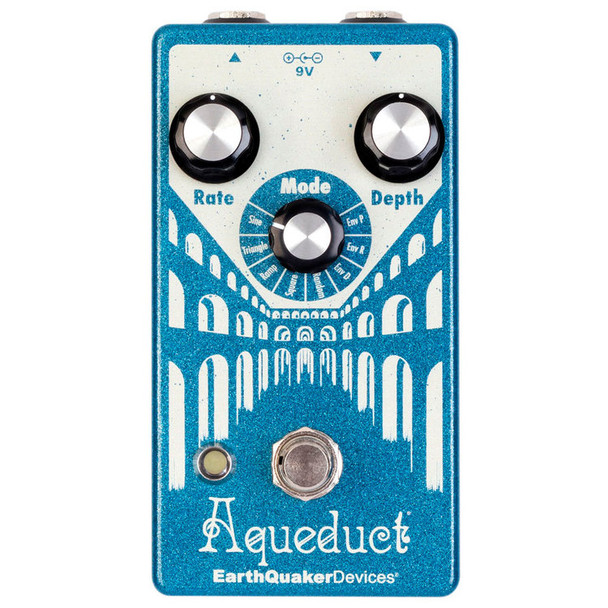 The controls are simple. Rate (1) adjusts the LFO speed which controls how quickly the pitch rises and falls. Depth (2) controls the LFO amplitude, adjusting the intensity of the vibrato effect. The rotary switch labeled Mode (3) selects between one of eight LFO waveshape and envelope combinations which drastically alter the character of the modulation and make Aqueduct adaptable to nearly any musical situation.

Modes
Sine: The smoothest and most subtle of all waveforms, sine waves are most commonly associated with classic amp-like vibrato. Plug in, turn on, and commence the Chooglin’.

Triangle: Triangle waves have a sharper rise and fall than sine waves with a more pronounced pitch bend at the peak of each LFO cycle.

Ramp: Like a triangle wave with a twist. The Ramp waveform has a sharp sonar pulse followed by a rapid downward slope with a synthesizer-like sustain and release. This is where things start to get a little weird.

Square: Square waves are the most rigid and abrupt of the waveforms. Rather than gliding smoothly between pitches, square waves produce an instant on-or-off transition between notes. Use this mode for trills when you get tired of doing hammer-ons and pull-offs.

Random: This waveform isn’t a waveform at all as much as it’s a drunken master of modulation who slurs your notes into an unpredictable assortment of greasy pitch-bends before disappearing at last call and leaving you stuck with the tab. It has a “warped record” effect at low Depth settings and becomes sloppier and more randomized as you increase the Depth control.

Env D: This is Envelope-Controlled Depth mode. The waveshape is set to a sine wave, the speed of which may be adjusted using the Rate control. The Depth control sets the sensitivity of the envelope - the point at which the effect kicks in as you play. In this mode, your pick attack sets the intensity of the modulation. The harder you dig in, the more pronounced the effect. Try it during your next motorik jam.

Env R: This is Envelope-Controlled Rate mode. In this mode, the input level (i.e. pick attack) controls the LFO rate. The LFO uses a sine waveshape. Play harder for faster modulation or lay low for slower modulation speeds. The Rate control adjusts the sensitivity of the envelope. Depth selects the LFO intensity.

Env P: This is Envelope-Controlled Pitch mode, which we’ve lovingly nicknamed “The My Bloody Valentine setting.” If your instrument doesn’t have a tremolo bar, it does now. In this mode, the LFO is set to a sine waveshape, and frequency modulation is controlled by the dynamics of your pick attack and not the LFO. Do yourself a favor and try this one with Flexi-Switching™.

Depth sets the wet/dry mix. This is the only mode that contains a wet/dry mix and may be set to taste to create touch-sensitive dynamic vibrato, chorus, flanger, or tactile pitch drops. Full counterclockwise is all dry, full clockwise is all wet. With this control set to noon you will get a 50/50 mix with a small amount of phase cancellation.

Rate sets the sensitivity and overall range of the pitch bend.

MSRP:
Now: $229.00
Was:
Stop me if you’ve heard this before: Welcome to the Rainbow Machine, in all its synthetic glory! This one is for experimenters, adventurists, and noisemakers. Totally not for purists and/or tone...
EQDRAINV2USA

MSRP:
Now: $199.00
Was:
The Afterneath sounds a lot like it looks – a wizard bursting forth from ethereal cave and ready for the ambient battle. You are the wizard – or sorceress, if you prefer – and the...
EQDAFTEV3USA

MSRP:
Now: $199.00
Was:
Gray Channel™Dynamic Dirt Doubler The Gray Channel™ is a real “twofer” of an overdrive. It is based around a classic hard-clipping gray box overdrive (subtle hint, huh), one...
EQDGRAYV1USA